The company Matarazzo, founded in Buenos Aires, Argentina, produced mainly low-priced tin toys from 1934 to 1959.
Matarazzo was the largest toy manufacturer in South America.
In 1938 the only known catalog of toys was published.
The logo of the company Matarazzo, Buenos Aires Argentina, is an outwardly arched M alone or in a circle, above it stands Juguetes (toys), including the company name Matarazzo.
See http://blogs.monografias.com/el-buenos-aires-que-se-fue/2012/12/05/los-juguetes-de-hojalata-matarazzo/ 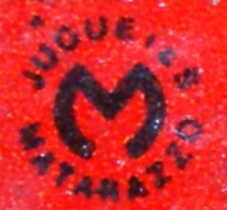