On 10.10.1869 the company Adrian and Stocl was founded by Mr. Walter Stock and his brother-in-law Carl Adrian in Solingen as steel goods factory, which distributed primarily cutlery, cutting and household goodsbut has not itself produced .
1905 Stock began with the production of angel chimes which initially were sold about the company Adrian and Stock. He produced mainly simple but imaginative figurative toys in the low price sector.
With his machine park he could not produce necessary war products for the First World War and the export languished . After the war articles of daily use such as Razors opener were mainly produced . They build up a galvanise department as many items had to be plated
1916 -1924 they Stock developed many patents which allowed the gradual inclusion of toy production. During this time, the cooperation with the American toy company Ferdinand Strauss begins. They produced toys for the U.S. and Europe market.
1926 was requested the closure of the production by the high dependence on exports in March 1926. It did not come to set, but he had to sell a factory building in Solingen. The production of the toys was continued on a reduced styles in rented rooms.
On 4/12/1932 Walter Stock died. His son Rudolf joined the company in 1928 in order to support his sick father.
1933 Paul Hartkopf who worked since 1914 in the company overtook the company, while maintaining the company name. The angel bells were still produced until 1968. Except for the small Sedan # 462 no toy was produced.
On 31.07.1971 stock rest were sold in the Kaufhof Solingen.
On 15/03/1972 the company was deleted. Paul Hartkopf died on 11.06.1979 without other members. No one knows to this day what made ??the tools and machinery 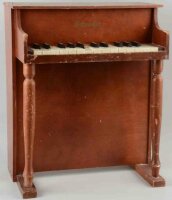