Approx. 1899 Hartmann & Gemeinbauer was founded in Nuremberg through the takeover of an existing company that could have been a supplier to Bing.
Production ceased in 1914 due to the First World War.
In 1919 the company was taken over by Konrad & Schweiger and in the same year by Georg Schweiger from Nuremberg.
In 1926 the company was sold to Leo Prager and Keim & Co from Nuremberg.
1932 Leo Prager closes the company and emigrates to the USA.
In 1938, Martin Fuchs from Zirndorf took over Leo Prager's existing shapes and inventory. 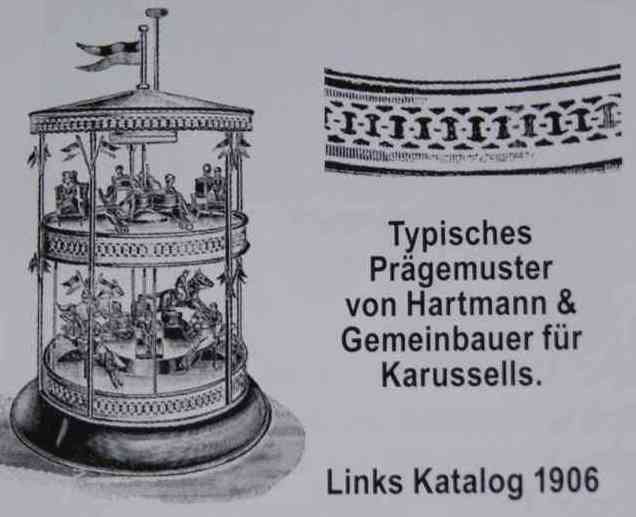 The photo shows the typical pattern of Hartmann & Gemeinbauer for carousels.
Every owner has at least the machines and shapes that he has taken over from the predecessor, so the same toy could be manufactured for many years without changes in design and function by different companies.

For everything, text and image, see Jürgen and Marianne Cieslik: Lexicon of the German tin toy industry, p. 174