Description:
Beautifully lithographed railway train passenger car, rare, front and rear, the wagon has an eyelet and a hook for coupling to locomotive and other waggons, the Penny Toy is lithographed identically on both long sides, in the 9 windows of the passenger area and in the 2 the doors of the waggon show people everywhere, old and young, all wear a hat as usual, a man with a beard, a pipe and a cloud of smoke, a woman with a big hat and a red bow around her neck, another woman also with a red ribbon, a man has his head in both hands and looks out of the window, another man with a cap looks out of the window, a woman wipes her nose with a white handkerchief, in which a window of the car door you can see a conductor in light blue service uniform with red collar mirrors and service cap with red hat band standing, in the window of the other wagon door a little girl with white hat, a nice detail is the water tank in light brown with 2 red reinforcing rings (as in the barrel the staves) down between the axles, this tank was filled with hot water, the car could thus be heated by its own, small central heating, every single passenger car was separately heated in this way, the quality of the lithography is absolutely comparable with that of JP Meier, marked on both sides in the middle of the car in a red dot with FZ, Gustav Fischer from Zöblitz used on Penny Toys as his logo this abbreviation FZ, it stands for Fischer Zöblitz, (for larger tin toys the Gustav Fischer logo was a fish and / or Efzet), Zöblitz is today a district of the county town Marienberg in the Saxon Erzgebirge (wiki), see the Gustav Fischer logos Cieslik "Encyclopedia of the German Tin Toy Industry", p. 141 bottom right and p.142 top left, this wagon is part of a penny toy train with a another wagon, a turquoise sleeper, which also has a water tank for heating and a green locomotive marked on the tender with FZ, see Vincent Lebeau's "More Penny Toys", p. 56, no. 126, Lebeau writes here that this is the only known penny toy train from Gustav Fischer, among many of his penny toys, the entire train is also in Christie's auction catalog 'Fine Penny Toys from the David Pressland Collection 2005", p. 32, no. 199 and is estimated there between 1200 - 1700 euros, further this single wagon is also shown in David Pressland "The Book of Penny Toys" p. 86, no. 259, but as erroneously attributed to Meier


Picture and text from: Jörg Muncke 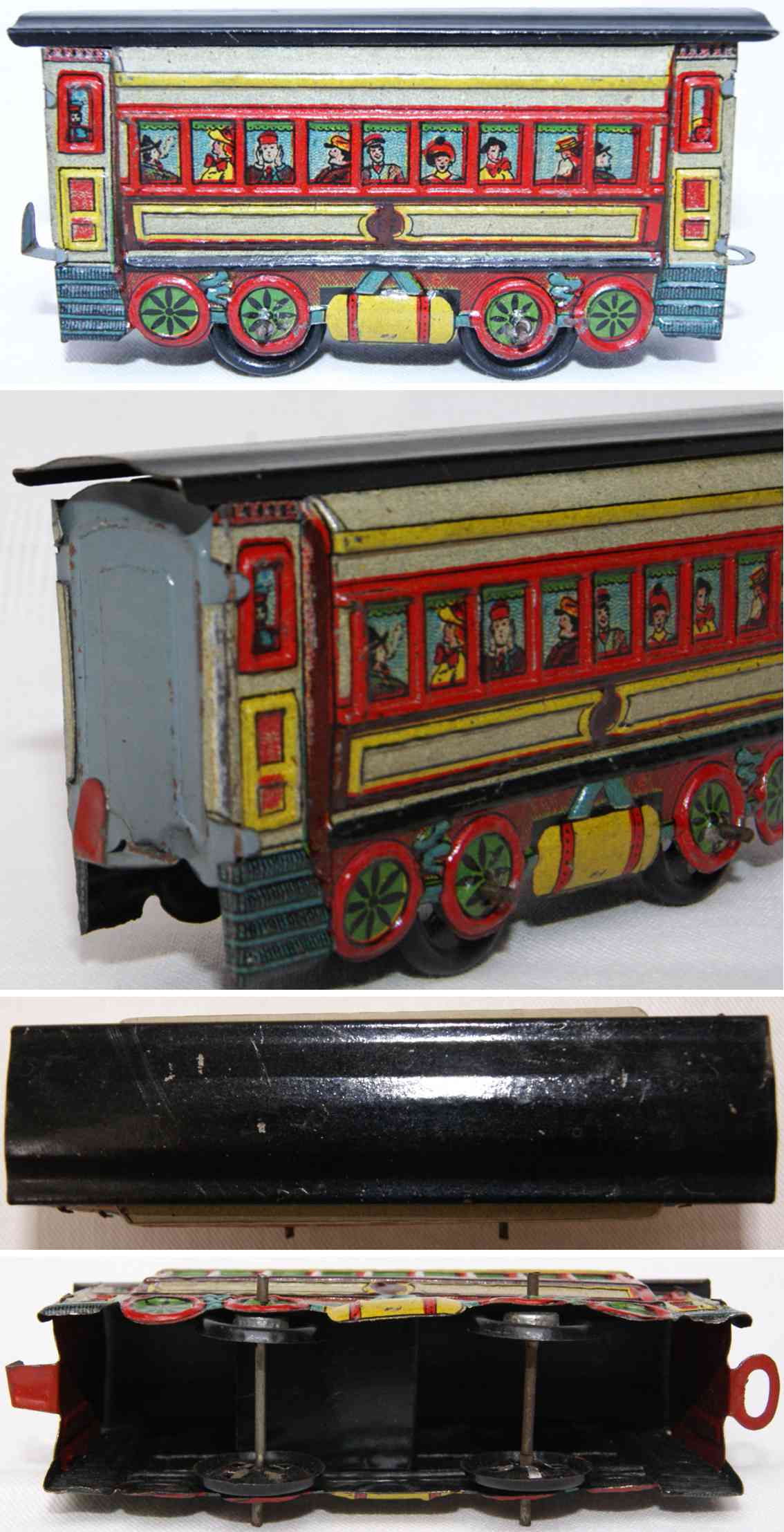