Description:
This version of the Meccano Steam Engine was not the first but was the first to be designed specifically to be incorporated into a Meccano model. The model was introduced in 1929, and minor changes were made later. What is now a classic chassis design, was, at the time, quite inovative. It is designed to make it very easy to incorporate the engine into Meccano models, instead of just powering them externally through a drive belt.
The vertical boiler is approx 4" tall x approx 1.75" diameter, fired by a meths burner. It is mounted inside an outer cover, which directs the burner gasses around the boiler sides. The cover is embossed with cosmetic detail. At the top of the boiler, the gasses are collected in a dome shaped top and directed up the chimney. As acquired, there was a blank filler plug on the top, where there should be a safety valve. I have fitted a reproduction SV. There is a water level cock on the side. The steam feed pipe exits the outer cover near the bottom and feeds, via a short pipe and union, to a brass block containing the reversing lever and port face. Reversing is accomplished by a valve which swaps the feed and exhaust ports. .
The Single acting oscillating cylinder is 3/8" bore x 9/16" stroke. The piston has 2 oil retaining grooves. The exhaust goes via the reversing valve, up the inside of the boiler cover and up into the chimney. .
The piston rod is connected to a small disk crank on one end of the crank shaft, on the other end of which is a 1.5" diameter flywheel. In the centre of the crankshaft is a small 12 tooth gear. This gear is positioned so that it should mesh with an approx 1.5" diameter gear on a shaft in the nearest chassis hole. The gears are not Meccano standard. I have fitted a pair of standard Meccano gears, the small one modified to fit the crankshaft and the large one on a shaft in a different pair of holes, conveniently spaced at 1" fom the crankshaft. .
As acquired, the whole engine was in pretty poor condition, with rust on all of the steel parts and much paint missing. What paint there was was not original. There were some missing parts; most obviously the burner, safety valve, top cover and chimney. The water level cock was (and still is at the time of writing) seized up solid. The special 1 1/2" gear is also missing. I have fitted a pair of standard Meccano gears.I have cleaned up and repainted the whole engine. I have modified a reproduction Luton Bowman burner to fit. A reproduction top cover for the boiler has been made, partly by a good friend and finished by me. A reproduction safety valve has also been made by another good friend.

An embedded media content was blocked here. A connection to the provider's servers is established when loading or playing. Personal data can be communicated to the provider. Load content 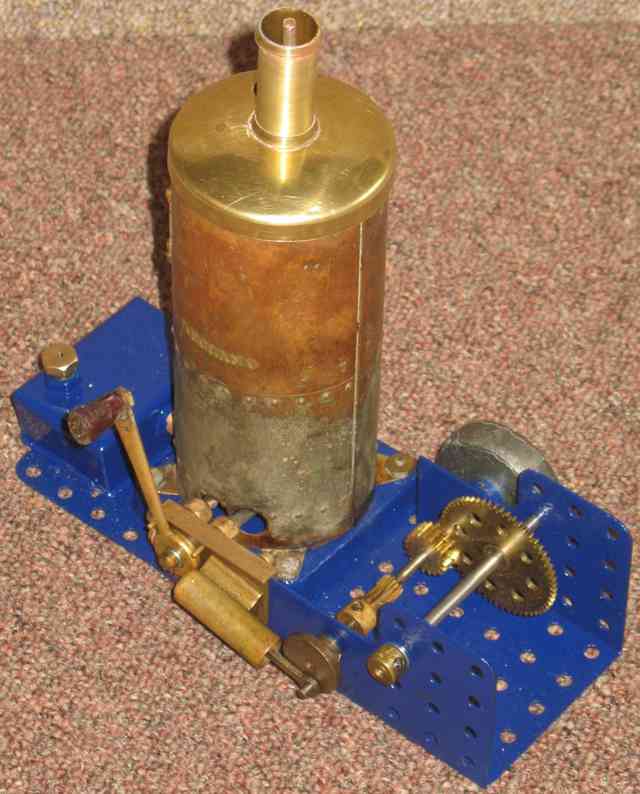 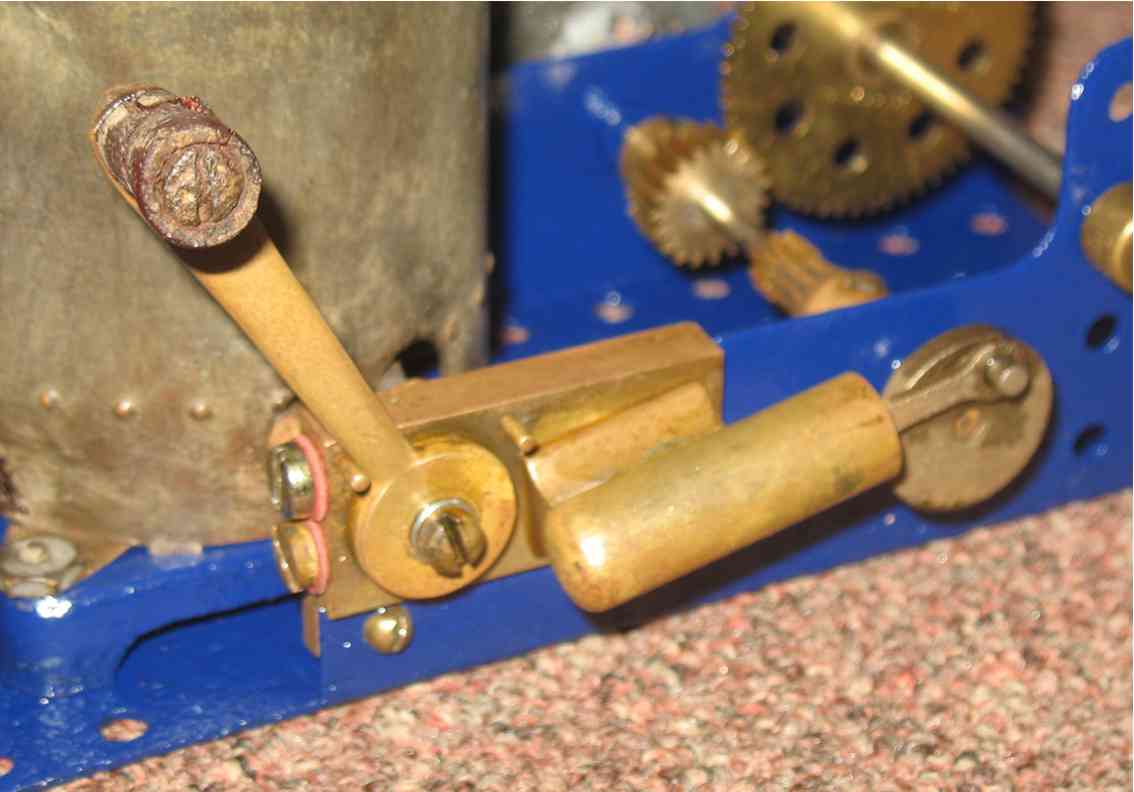